The Origins of Corporate Social Responsibility

The concept of corporate social responsibility (CSR) already began in the mid-twentieth century when people from the business world and research started to discuss the social responsibility of companies. At the time, the discussion focussed primarily on the social contribution (charity, labour issues) that companies could make to society. Since the mid-1990s, there has also been increasing discussion on ecological issues within the context of CSR.

At the beginning of 2000, the European Union (EU) took up the idea of the social responsibility of companies, realising that CSR is a chance to encourage companies to make voluntary contributions to social and ecological sustainability outside the regulatory framework. The EU green paper on CSR demands that environmental protection and social interests should be given equal attention and states clearly that CSR should contribute to the implementation of strategic goals set by the EU (Lisbon 2000) and its sustainability strategies (Gothenburg 2001).

In 2002, the EU set up the European Multi Stakeholder Forum on CSR which represents environmental and social NGOs and business associations. Their aim was to reach consensus on CSR and come up with joint recommendations for the promotion and advancement of CSR. The multi stakeholders’ final report was presented in July 2004. Then there was a certain change in the EU policy approach regarding CSR. Since the beginning of 2007 CSR Laboratories were estabilshed under the umbrella of the European Alliance for CSR. The laboratories developped approaches for CSR management. In February 2009 the European Commission hosted again a plenary meeting of the European Multistakeholder Forum on CSR. The aims of this meeting were to review progress on CSR in Europe and globally, and to discuss possibilities for future joint initiatives.

The sustainable development concept originated from environmental protection. At the UN-Summit in 1992 in Rio de Janeiro, sustainable development was established politically as a model concept for global society, i.e. at the macro level. It was not until the mid-1990s that the transferral of this concept to companies (micro level) was first considered. Today, the issues dealt with in CSR and sustainable development overlap and these were systematically examined probably for the first time by Loew et al (2004).

A Clear Definition of CSR

At the moment there is an abundance of terms related to CSR, sustainable business management and corporate citizenship along with various interpretations of individual definitions due to different historical origins. These terms are often incorrectly used as synonyms or are used with very different meanings.

To our experience in business praxis there is no difference between CSR, CR and sustainability management . 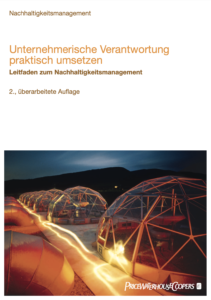 Together with PWC and akzente, we decribed already in 2009 the Design of a systematic CSR-Management.